The Blind Woman In The Mirror 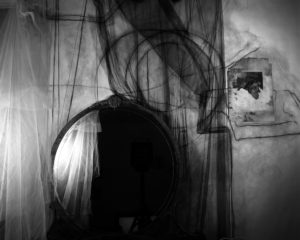 It was just another day, another morning as she walked sleepy eyed to the bathroom massaging the wall to find the dim light. Switch up. Eyes down. That was the usual mode, but this time the light flickered in her right periphery and she caught a glance of a woman’s face.

She took a deep breath, studying with intense curiosity, this face that she’s only seen a million times. But, the face of the soul, the face on the inside seemed to look different, sounded different, and definitely felt different than the face staring back at her in the mirror.

It was around 1am in the morning when she bolted out of bed, not from a bad dream, but the sound of a gun shot in her head. One. Very loud. Gunshot. Resounding. It was real. She heard it, but when she awoke there was nothing but silence. She jumped out of her bed to check outside. Nothing, but deafening silence.

The silence carried with her. Not the kind of silence that is serene and peaceful, but the silence of death that is eerie and unsettling. The kind of silence that creates an anxiety that is insurmountable by any modern or new age medicine technique. She felt an intense and excruciating pain on the right side of her head. The spirit sounds blazed within – calling and warning.

She looked in the mirror to see everything right in the wrong, but the things that were wrong in the right could barely breathe, could barely be seen. She was blinded by her own curiosity, by her own commitment to Truth. The pounding of her head brought her back to that moment where blood stained the white tissues next to her bed awoken by the nemesis who forewarned of the late arrival.

It was hard to tell at this point what was real and what was a dream, for the dream in possibility is the reality in which we plant ourselves and the reality in which we uproot ourselves is the dream we envision without strength of spirit. “To stay here now through the best feelings we’ve ever felt and to find steadiness in the sting and wound of the deepest pain we’ve ever known and consciously choose to stay, to feel, to breath it and touch it and become very intimate with it, that’s a reality when we choose to plant ourselves in it will deliver purposeful possibility and it will uproot us from the mind wanderings of fear and escape – that’s strength of spirit,” she noted.

Each day that went by was just another day in the life of being a mom, a teacher, a friend, a “that thing” we fill in the blank with that defines who we are, it gives us contours to follow and understand, it gives our life shape and meaning. Yet, every time she looked in the mirror that label she was always filling the blank with whether it was a mom, teacher or friend looked different and felt so different. There was fuzziness in the mirror. It was blurry. Every morning she awoke and looked at the reflection staring back at her, she noticed a blind spot and the blind spots kept multiplying. The contours faded and life as she knew it felt shapeless. She took deep breaths and kept a relentless Faith that there was a story to be told here, there were melodies to be spoken and there were words to be painted.

The spirit calls were blazing like fire alarm sounds. As she sat on the edge where pain enveloped love, something inside her lit up, like a tiny and lonesome firefly lost in the darkness, flashing light every few seconds. Each time she uprooted herself from the reality of the moment it extinguished.

She thought back to the time they were walking around the lake. His foot got wedged on a rock in the water and terror struck through her body playing the dark hued vibrations of ineptitude as she began to watch him drown in the deep waters that hold the key to shaping life’s contours. “I can’t force him to come with me”, she said. “I can only reach my hand and guide him, without manipulations, but with a deep and committed love called out with the loudest whisper from the soul. It’s the feeling that humanity reaches for, mistakenly, every time they reach for the next perfectly numbing and awe inspiring spirits drink or numbing device for the millionth time to replace the void with coated poison. It’s like black gold.”

She reached out her hand, her soul begging his to reach for it, but he didn’t take it. She was crushed and woke up to another day slowing massaging the wall. Light switch up. Eyes down. The reflection caught her again and she was frozen with gut-wrenching pain and a subtle understanding of the events about to unfold. The blind spots were breaking and the lens in which she wore around her spirit was stained with scarlet hues, bleeding love’s infinite scars.

Uncanny. That face that stared back at her when she glanced at the image in the mirror. It was the same face she looked at for the past 37 years, but this time, it was so, so, so very different. The face on the outside looked the same, but the face on the inside, the face of the soul felt different. It was shaken, but still in tact. It was stirred, but still strong. The light was there, but sometimes it was so dim. Life’s problems were nothing compared to the magnitude of the pain the face of her soul was processing.

Intra-oral gunshot wound to the head is what the death certificate said. The gunshots were real. The blood stained tissues on the bedside, they were real too. Spirit called to warn. Before she got the call that froze the bottom half of her body and shocked her system a few light years a head of her own time, there were dark forces that came to visit her. She could feel his trauma and the deep cries for relief, but the cries were coated with disbelief that all would eventually unfold in the embrace of loving Grace.

The order events eventually laid out very clearly to her and she felt so heavy she could barely move, she could barely focus, and could almost barely breathe the weight on her chest was so heavy. “They had always been deeply connected despite walking some of the darkest corners together known to man”, she thought. She was warned of the upcoming tragedy and she was trying to come to terms with the order of events. Her soul felt deeply scared. It was clearly a tragic loss for humanity when someone takes their own life, but the scar she felt, that deep wound left in her soul, it seemed unhealable. It wasn’t just another human that left this existence, a piece of her spirit seemed to have been crushed, lost, and buried with this tragic loss.

“I have to find a way to resuscitate my spirit”, she said determinedly.   She kept walking forward in life as if everything was the same, but it didn’t feel the same. The image in the mirror looked the same, but the image on the inside was in so much excruciating and gut-wrenching pain. Her life lens was stained with the deepest sadness and pain, and the rays of light she knew so intimately seemed so dim.   “It’s ok, honor the pain,” she finally acknowledged to herself.

She began to realize that the woman in the mirror was blind not by ignorance, but by grief. The violent nature of the events matched the intensity of the grief. “We face loss everyday in a myriad of small ways and big ways from not having our schedule work out the way we planned to, to not getting that certain opportunity, and finally there are bigger losses such as loss of financial support and human connections. The losses that leave some of the biggest grief scars are those that appear to be preventable. When someone takes their own life, when someone so intimately close to us chooses to leave, there’s an indelible mark on our soul and naturally a million questions we are left wondering and trying to make meaning of how we could not have possibly seen this coming and helped prevent the tragedy. But there are some things that appear to be preventable and controllable, that in fact are quite elusive and slippery. This event was one of them. I loved so unconditionally that through the waves of grief, I do find some peace. I loved the ugliest of ugly hellacious moments with this person and I was never afraid to say so, to say that I love you – no matter what.”

“That was courage,” she thought, “to love the ugliest of the ugly, the darkest of the dark, no matter what.” The two images kept causing such dissonance though. She kept trying so hard to be the same person before the tragic event happened. It was like she was grasping for control in an uncontrollable world. The thing was, she wasn’t the same person. The tragedy left scars on her spirit, but it also seemed to be making her stronger in other ways. “I have to let go”, she repeated as her mantra each morning. To mark the occasion, to mark this spiritual rite of passage, she had to renounce what was no longer serving her spiritual growth and evolution. “And, that’s how the hair came off”, she noted in her journal.

The Bhagavad Gita says, “Ceasing to do things will not make you “actionless.” Nor will you rise to perfection simply by renouncing actions. Sri Swami Satchidananda further explains this aphorism:

Renouncing action should come automatically instead of you forcing it by insisting: “I renounce.” Instead of trying to push the desire out, you can develop a natural state of desirelessness in which you don’t feel the need of anything. Then you’ve truly renounced. You can’t force renunciation. But you can prepare your environment for this and let yourself mature.

It was another early morning. Eyes barely open. Light switch up and this time instead of gazing down, her gaze was up. She caught a reflection in her right periphery and noticed something was different. It wasn’t the fact that the hair wasn’t there anymore that caught her attention; it was the balance in the image on the inside – the spirit image – and the image on the outside. There was no desire to grasp at controlling in either direction – inwardly and outwardly. “Desirelessness is the state of just being and accepting the good, the bad, and the ugly,” she said out loud to herself in the mirror.

She felt it in both directions. Resonance in the pain had delivered itself in imagery. The blind spots would fade as the hair grew back and each morning she awoke she would physically see the preparation of her new environment and the spiritual maturity to come in each moment, happened in each moment, already happening in each moment. “The blind woman in the mirror finally saw the deepest reflection of her soul that showered light on her vision,” she read from the day’s writing. The shadows gave her context. The light gave her vision.  And, the two hues mixed together gave her soul love. She still loved. Deeply, loved.  All of it.  No matter what.

Comments on this entry are closed.